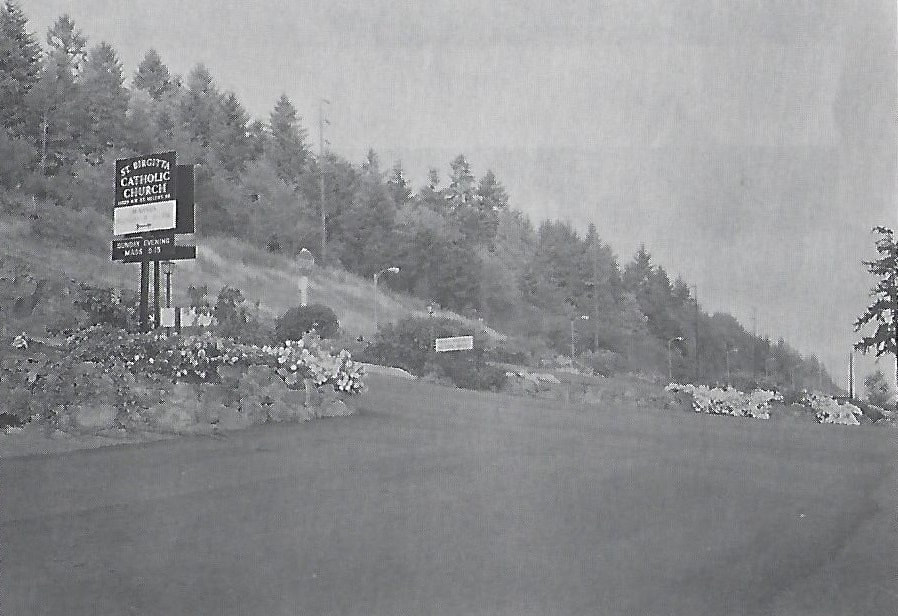 Landscaping and Parking
Part 4
Prior to this, in June of 1965, about one thousand 10 yard truckloads of rock, dirt, and gravel were brought in raising the church grounds, in some places 2 to 4 feet and in others 10 to 12 feet, particularly where the picnic area is. 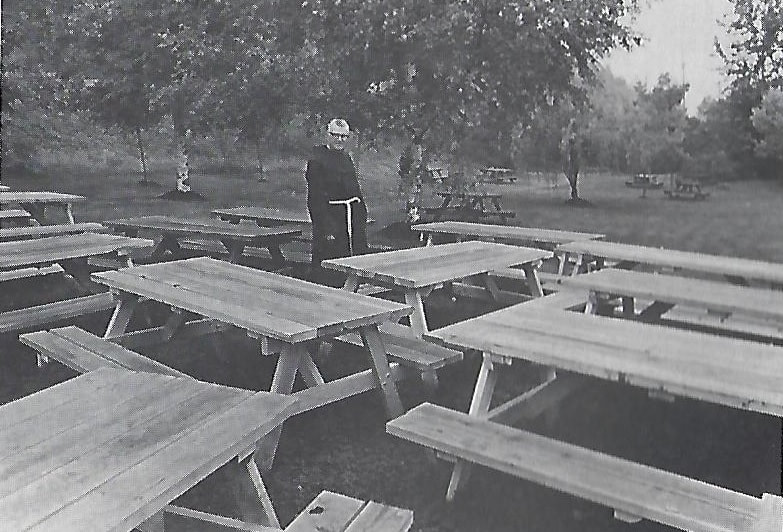 Within recent years the chancery office was imposing various assessments on parishes. St. Birgitta Parish was unable to meet them regularly, and the unpaid assessments were automatically transferred to parish debt. For this reason the parish now has a debt of about $14,000.00.

Since in recent years U.S. Highway 30 was widened, many homes were destroyed and some families have moved away. No doubt this affected the financial condition of the parish which had less than one hundred families in the beginning.

Judging from the first days of this parish until the present and seeing that parish activities were a great factor in paying the financial burdens, one may say this: As it was in the beginning, it is now, and I am afraid, it always will be. 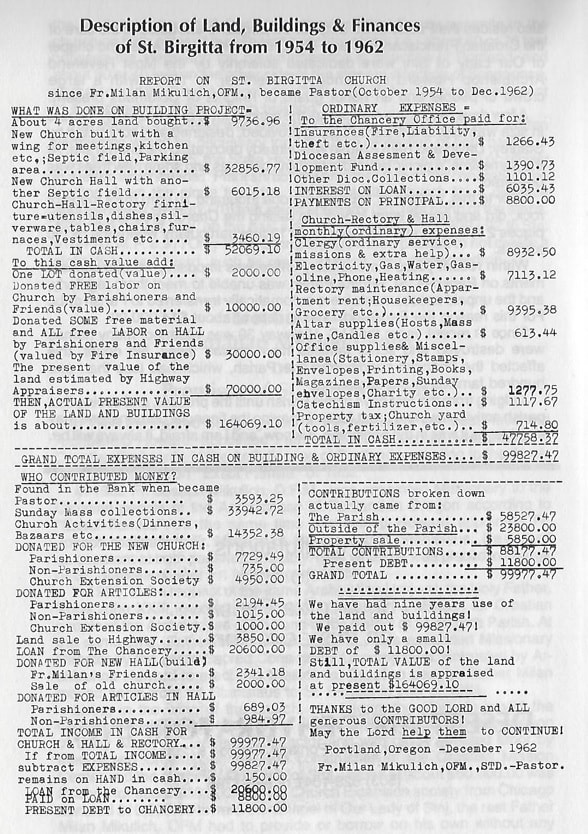 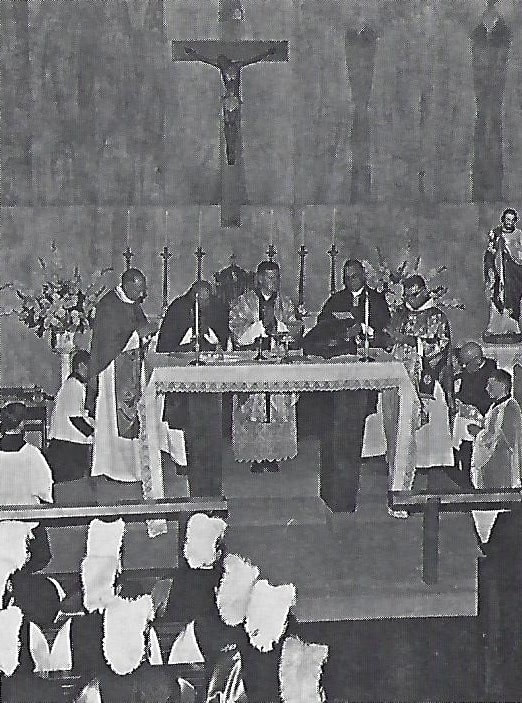 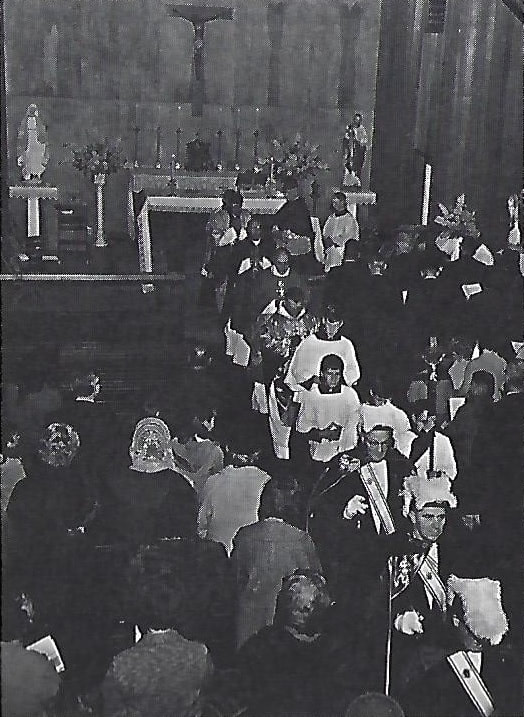 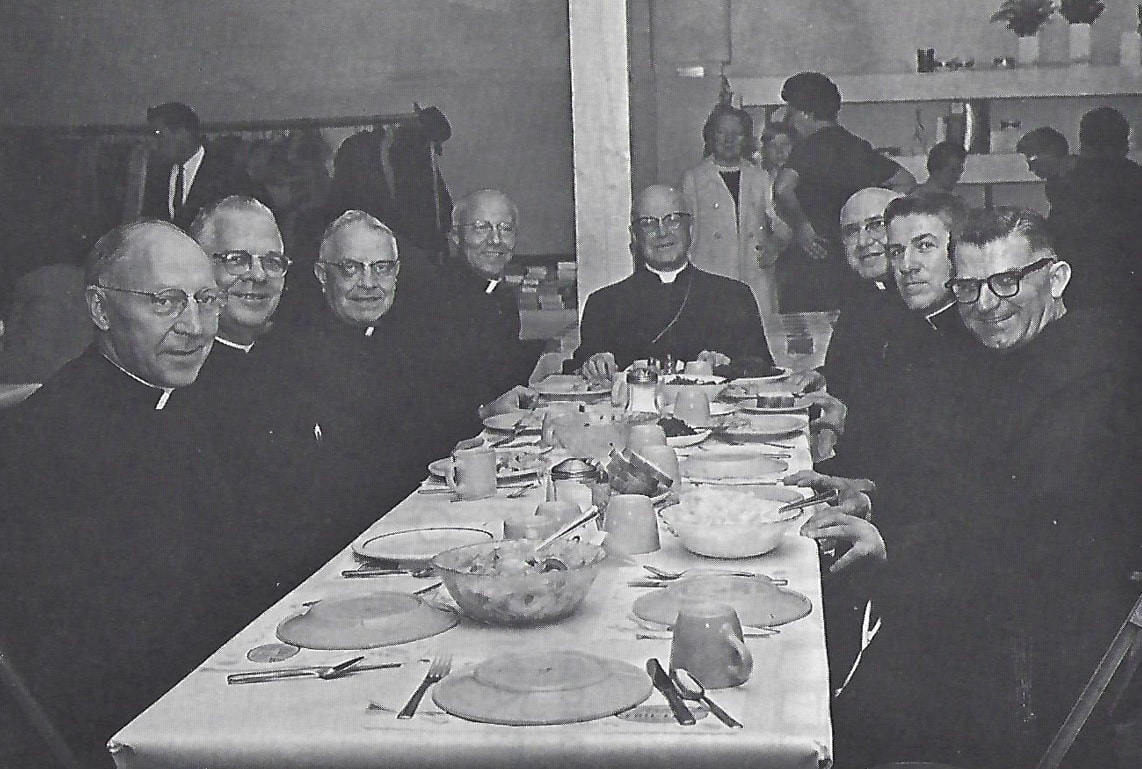 ADMINISTRATION OF THE HOLY SACRAMENTS
Within the period of the last ten years, we administered 111 baptisms, 80 first holy Communion, 39 marriages and 59 Confirmations. During some years we had a small group and for this reason we took the boys and girls to some neighboring parishes for Confirmation.  There were 10 converts and 26 deaths.

ST. BIRGITTA PARISH ASSESSED FOR LA SALLE HIGH SCHOOL
IN MILWAUKIE, OREGON IN 1967
After La Salle High School was built, it was discovered that, due to the poor supervision of those who were in charge, the cost was twice as high as originally expected. This statement was made by the Superior of Christian Brothers at the clergy dinner for the occasion.

Since there was an agreement between the Archdiocese and the Christian Brothers to share the expenses, the Archdiocese was obliged to pay its part of the higher expense.

To solve this problem all parishes in TRI-COUNTY were assessed to pay for this high school.

St. Birgitta's assessment for it was $5,250.00, which automatically was added to the parish debt. Thus, while the parish had to pay for the amount of $5,250.00, it also had to pay the interest on this amount until it was paid in full.

It really seemed that the more we were paying on our original debt and its interest, the higher the parish debt was getting through new archdiocesan assessments, and there was no relief in sight, either!

PARISH SOCIAL ACTIVITIES
From February 11, 1968, until February 21, 1976, the parish has served with 24 social activities, one of which was a raffle of a heifer donated by Thomas Feehely, a parishioner, and one was a food sale. The other activities included 22 dinners, 3 of which were spaghetti; 4 barbecued chicken; 1 pizza; 11 crab feeds; 1 swiss steak, and 1 sausage and kraut dinner.

In the first years, crab was the best way to make money, because its price was very reasonable. We paid for 1 pound about 35 cents, cleaned, iced and delivered by a reliable fish market. We charged the customers about $2.50 for "all you can eat", and still we made a nice profit for the parish. Later on, the crab was scarce, and California was eager to purchase the Oregon crab, so its price went up so high that we could not make anything on the crab. For this reason we quit serving crab feeds from April of 1972 until February 1976. This year we tried again, hoping to do better, but our luck ran out on us. It will take probably a good number of more years to serve it again!

Crab feeds did not require so much work as the other dinners did. While they were profitable, we repeated them more often than other kinds of food; however, when they turned out to be unprofitable, we quit them.

ONE PART OF THE CHURCH GROUND RAISED
There was much talk about taxing the church properties. For fear that this might materialize and impose high taxes on the parish, being that the land is in the industrial area, Father Milan Mikulich, pastor, considered that it would be advisable to sell a portion of the land at the far end toward Portland. It was not usable for the parking, being full of brush, nor needed. The level of the land was about 12 feet below the level of Highway 30.

At a parish meeting it was decided to sell 150 feet along the highway. An official of the chancery office was called to give his opinion.

After inspecting the place and realizing that there was no possible entrance to the land from the highway without new fill dirt, he estimated that a fair price would be $5,000.00. It was sold on August 13, 1969, for $5,000.00, which was applied on the parish debt.

As agreed between the St. Birgitta Parish and the Oregon state highway on 10th of December 1962, the church had the right to fill against the state highway slope in order to raise the ground to the level of the highway.

On October 13, 1971, a letter was sent to the state highway asking for the permit on the above-mentioned right to proceed with filling the dirt to the top of the highway, both on the sold property of 150 feet plus 100 feet of the church property.

The State Highway Commission approved the permit on December 7, 1971.

There were two reasons that the 100 feet of the church property were raised: the one for eventual sale if the church properties are ever taxed in future and the parish is unable to afford the money. In that case an entrance to the property from the highway would be needed. The other reason was this: in the winter when the weather is icy, it is difficult to come out with the car from the church parking lot to the highway. To remedy this problem, it was thought that the people might park on the raised ground and walk to the church.

ERECTION OF ST. BIRGITTA PARISH
AND
ESTABLISHMENT OF BOUNDARIES
From its beginning St. Birgitta Church was either a mission church of another parish or an independent entity but not a parish in the canonical sense.

On July 10, 1969, Archbishop Robert J. Dwyer issued a decree erecting the canonical parish of St. Birgitta and at the same time establishing its boundaries.

Hereby is inserted the decree, in which our readers and parishioners of St. Birgitta may see whether they are within its boundaries. 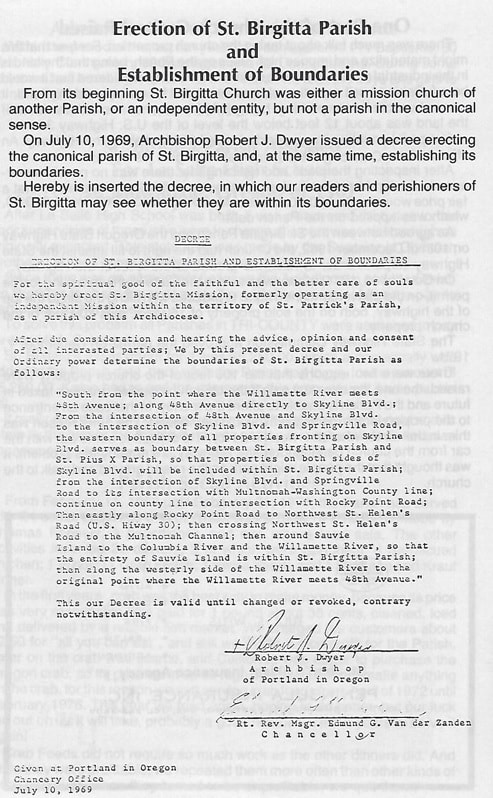 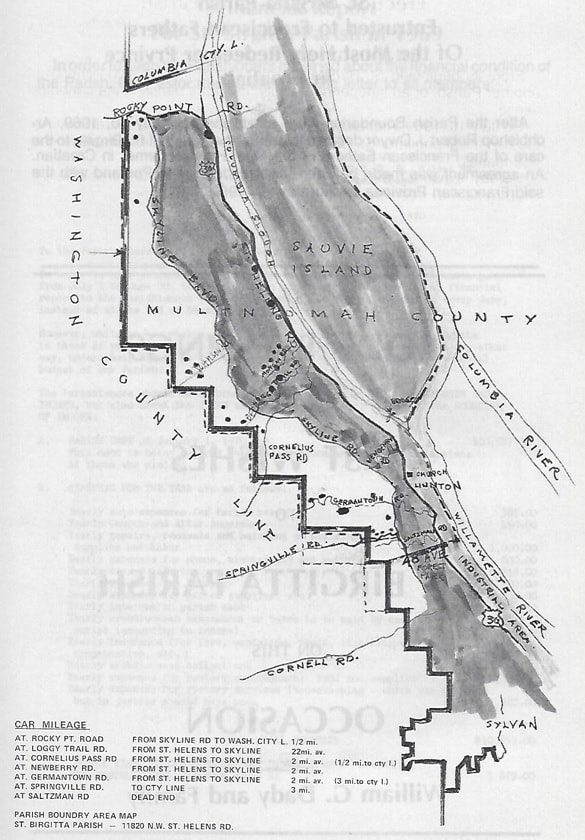