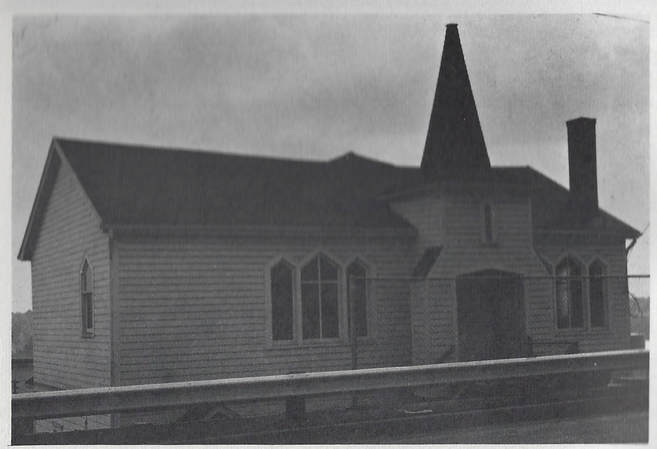 Original church - 1916
The follow history was published in the 1976 souvenir program celebrating the Diamond Jubilee of the parish:
The History of St. Birgitta Parish

Part 1
In the first decade of this century there was no Catholic Church in Linnton nor were there many Catholic families; however, a priest came once a month from St. Patrick Church to say Mass in the private home of Anna Lembeck (now Mrs. Anna Engeldinger) who was born in Linnton in 1891 and now resides in Hillsboro, Oregon where she moved in 1914. The other Sundays people of Linnton went to Portland to hear Mass. When a few more families moved into the area, they rented a hall for Mass. (From a letter of Anna Engeldinger, October 12, 1966).

Father Charles M. Smith, Pastor of St. Clement's Church (now Assumption Church) in St. Johns, conducted two missions in Linnton during December 1915 and March 1916 in the Catholic Church Extension Society's “St. Peter's Chapel Car," which he also used in other parishes. The Chapel Car, a railroad car, was placed on side tracks at the Linnton Depot.  Missions were conducted in the evenings. Mr. George Hennessey, undertaker, who had a wonderful voice, used to come in the Chapel Car and sing during services. Some still remember how Father Smith baptized four girls in the Chapel Car, and how even friends of Protestant faith came to these services. After these two missions, Most Reverend Archbishop Christie commissioned Father Smith to organize a mission parish at Linnton. (The town of Linnton "in 1915 was officially absorbed into the City of Portland," -- See" The Oregonian", Portland, Oregon, April 30, 1961, p. 26).

Before the Church of St. Birgitta was built, Mass was celebrated Sunday mornings in the town dance hall for a number of months. The first Mass was offered March 19, 1916. It was the first time many of the children had seen a Priest or attended Mass. Seeing the Priest at the altar, a boy began to cry, saying, "I do not like that man's dress". Mrs. J.J. Wilson, who after her husband's death, married Mr. J. Reedy, had to start at about 7 A.M., for 14 Sundays to put the dance hall in order for Mass. She carried in a suitcase the vestments, chalice and altar stone, all of which weighed 14 lbs. It was about one mile each way to the church.

Due to the unusual geography of the place and location of the Catholics in that district, the little church was built about halfway between Linnton and Whitwood Court on two very steep lots donated by Mr. Walter Guerin. The building was built on stilts and had three stories, the top floor was the church, which was connected by a wooden bridge to U. S. Highway 30; under the church was the hall with the stairway leading to it and the third floor was left open.

In order to place the other end of the bridge on the State Highway property, Father Smith wrote asking permission. Since he did not receive any answer, he assumed that permission was not needed, and proceeded to build the bridge. When all was finished, the State Highway men came and demanded removal of the bridge, which supposedly was built without their permission. When Father Smith produced the copy of his letter, which they had never answered, he was told that they respected his consideration in asking for permission and would allow him to use the bridge until the time came for them to make a change on the highway. 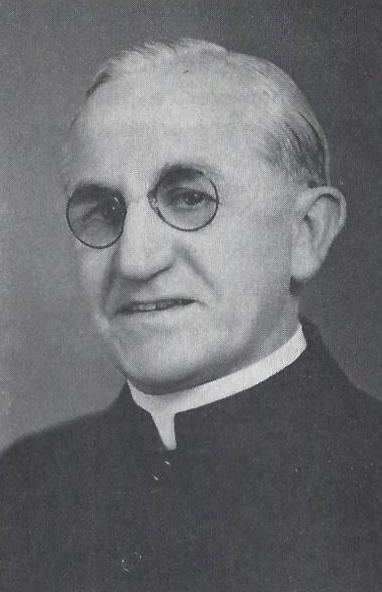 Msgr. Charles M. Smith, Founder
It was one of the most unusual church edifices not only in Oregon but in the United States.  Father Smith often repeated that St. Birgitta's Church was three times in Ripley's "Believe It or Not."

After the Church was built, General Petroleum Co. (Now Mobil Co.) built its plant on three sides of the little church, the fourth side of it faced the highway.

The first Mass was celebrated in the new church on July 2, 1916.  The dedication by Most Reverend Christie on July 16, 1916 was followed by the administration of Confirmation. After the ceremonies, Archbishop Christie and Father Smith were guests of Mr. & Mrs. J. J. Wilson for dinner.

The Church cost about $2,000.00.  The Catholic Church Extension Society of Chicago contributed $500.00 toward this amount and since the donor of this money expressed the wish, the new church was dedicated to St. Birgitta. Some parishioners donated various articles for the church and the hall: statues, windows, tables, chairs, etc.  With these donations as well as with financial offerings and many church activities, such as dinners, sales, dances and others, the church was paid for within a short time.

There were about 100 people who attended this church. There was an Altar Society of about 44 members, seven or eight of whom were men.  Mrs. J. J. Wilson taught Catechism to about 40 children for 8 years.  Serving faithfully as altar boy was Peter J. Ermler.

Father Charles Smith resided in St. Johns and every Sunday a young man, Mr. Edward Barry, used to row him across the Willamette River to the point where the present St. Johns Bridge is.  From there Father Smith walked to the church, and after Mass, walked back to the same point and Mr. Barry, who could see him walking from the other side of the river, would come and row him back. This was necessary because the Ferry did not operate on Sundays.

On August 1, 1917, Father Smith was transferred to the Cathedral from where he took care of the territory which is now St. Anthony's, Our Lady of Sorrows, and Holy Family parishes.  He was succeeded at St. Birgitta’s by Redemptorist Fathers from St. Clement's Parish in St. Johns.  One of the Priests was Father Nealon, C.Ss.R.  He had charge of Linton each Sunday. During his time at St. Birgitta's, the Christmas Crib was provided through the generosity of Mr. and Mrs. J. J. Wilson.

Redemptorist Fathers were in charge of St. Clement's and St. Birgitta's only for a short time. In 1917 the Servite Fathers took over on request of Archbishop Christie. Father Vincent Healy, O.S.M. and Father Lyons, O.S.M. were in charge of St. Birgitta. The Fathers used to come to Linnton on Saturday evening and stay overnight at Mr. J. J. Wilson's.  They offered Mass at St. Birgitta's on Sunday at 8 o'clock in the morning, then left for North Plains by Interurban Car which came from Portland (later jitneys were introduced because interurban was losing money), where they offered the second Mass at 10 o'clock, and returned to Linnton by the same Interurban by noon. After having dinner at Mr. J.J. Wilsons, they returned to St. John's. In the spirit of the first Christian families, who generously helped the Apostles and other missionaries in the vineyard of the Lord, the services at J.J. Wilson’s were always gratis to the Priests. 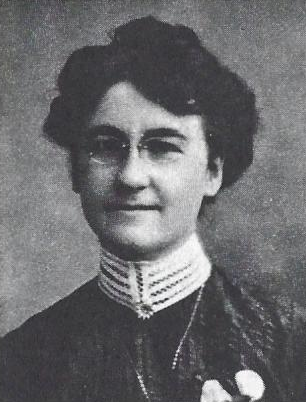