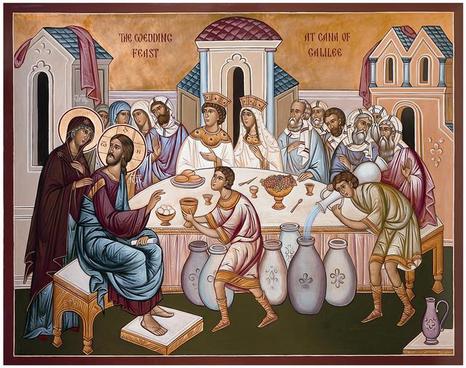 "The matrimonial covenant, by which a man and a woman establish between themselves a partnership of the whole of life, is by its nature ordered toward the good of the spouses and the procreation and education of offspring; this covenant between baptized persons has been raised by Christ the Lord to the dignity of a sacrament."

Marriage in God's Plan
Sacred Scripture begins with the creation of man and woman in the image and likeness of God and concludes with a vision of "the wedding-feast of the Lamb." Scripture speaks throughout of marriage and its "mystery," its institution and the meaning God has given it, its origin and its end, its various realizations throughout the history of salvation, the difficulties arising from sin and its renewal "in the Lord" in the New Covenant of Christ and the Church.

Marriage in the Order of Creation
"The intimate community of life and love which constitutes the married state has been established by the Creator and endowed by him with its own proper laws. . . . God himself is the author of marriage." The vocation to marriage is written in the very nature of man and woman as they came from the hand of the Creator. Marriage is not a purely human institution despite the many variations it may have undergone through the centuries in different cultures, social structures, and spiritual attitudes. These differences should not cause us to forget its common and permanent characteristics. Although the dignity of this institution is not transparent everywhere with the same clarity,88 some sense of the greatness of the matrimonial union exists in all cultures. "The well-being of the individual person and of both human and Christian society is closely bound up with the healthy state of conjugal and family life."

God who created man out of love also calls him to love the fundamental and innate vocation of every human being. For man is created in the image and likeness of God who is himself love. Since God created him man and woman, their mutual love becomes an image of the absolute and unfailing love with which God loves man. It is good, very good, in the Creator's eyes. And this love which God blesses is intended to be fruitful and to be realized in the common work of watching over creation: "And God blessed them, and God said to them: 'Be fruitful and multiply, and fill the earth and subdue it.'"

Holy Scripture affirms that man and woman were created for one another: "It is not good that the man should be alone." The woman, "flesh of his flesh," his equal, his nearest in all things, is given to him by God as a "helpmate"; she thus represents God from whom comes our help. "Therefore a man leaves his father and his mother and cleaves to his wife, and they become one flesh." The Lord himself shows that this signifies an unbreakable union of their two lives by recalling what the plan of the Creator had been "in the beginning": "So they are no longer two, but one flesh."