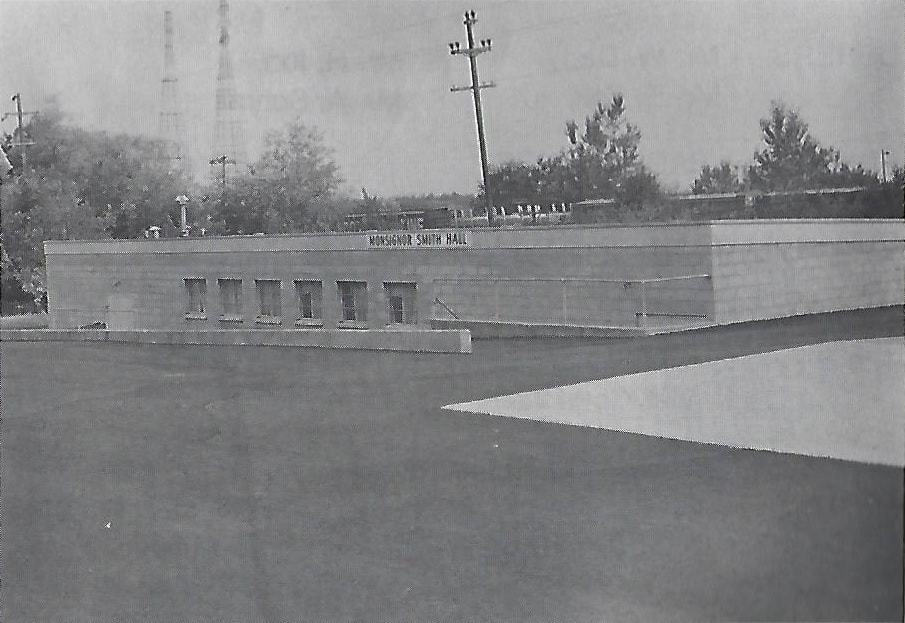 Msgr. Smith Hall – Built 1959
Part 3
So again on August 15, 1959, the first steps were taken for the new hall. With the donated help and supervision of Knez Bros, general contractors, and the donated labor of many volunteers from the parish and outside, the hall was ready for dedication by the Most Reverend Archbishop on the first Sunday of December 1959. Due to the enormous amount of free labor and some donated material, the building, valued at about $30,000.00, cost in actual cash only $6,000.00. Of this amount, $2,000.00 came from the sale of the old church, and the rest was donated by the friends and parishioners so that the hall was debt free at completion. The hall was named "Msgr. Smith Hall" after the founder of St. Birgitta Church in Linnton.

In 1962 the Oregon State Highway Department purchased a strip of frontage from St. Birgitta's for $4,000.00 and, in addition, removed two culverts through which water was coming onto church property causing large puddles to form. They agreed to slope the new highway away from the church property and to pave the entranceway to the church. They also agreed to make a concrete stairway with hand railing in front of the Church and to landscape the slope facing church property. With the $4,000.00 received from the State, Father Milan purchased land for picnic grounds from Mr. Kingsley.

It is noteworthy to say what an interesting and very tempting consequence followed after St. Birgitta Parish had received this amount of $4,000.00 from the Oregon State Highway Commission.

The State Highway Commission, at the end of December 1962, made the check of $4,000.00 to the Archdiocese of Portland, which in turn, on the last day of December 1962 paid the same amount to St. Birgitta. Father Milan Mikulich, O.F.M., Pastor, deposited the check on the same day, with which he paid the Kingsley Lumber Co. for the parcel of land, where the present picnic grounds are located.

Realizing that a mistake was made by Mr. Loseth, Fr. Milan told him that the parish of St. Birgitta had already, on December 31, 1962, received the check of $4,000.00, paid by the State Highway Commission. Mr. Loseth insisted that this was St. Birgitta's money and that Father Milan should keep it.

Thinking that this way of acting on the part of Mr. Loseth might be an indication of some other wrongdoings, which could be detrimental to the Archdiocese, Father Milan informed Archbishop Edward D. Howard about it. The Archbishop called George Black & Co., Auditors and Counselors, who were auditing the books of the chancery office.

Mr. John F. Lee, of the same George Black & Co., tried to convince the Archbishop that Father Milan was wrong and that this sum of $4,000.00 indeed belonged to St. Birgitta. The Archbishop accepted the explanation of Mr. Lee and told Father Milan to keep the money for the parish.

At this point Father Milan found himself in a delicate dilemma; either to take the money they were offering and to have a reduced debt, but to be considered as the one who did not know his financial affairs; or to refuse to accept the money and struggle several more years to pay the debt, thus, maintaining his own integrity and at the same time, proving that George Black & Co. was wrong.

So Father Milan decided to refuse the money and brought to the Archbishop the books which proved that the chancery office had already paid on December 31,1962, to St. Birgitta the sum of $4,000.00, received from the State Highway Commission.

The Archbishop, then unhappy with Mr. Lee's claim, sent Father Milan to Mr. Lee to give a better explanation.

Convinced with Father Milan's proofs, Mr. Lee admitted his error and wrote a letter to this effect, which is being presented in a photocopy in this book. Mr. Lee told Father Milan: "We are looking for an owner of $4,000.00, and we thought it belonged to St. Birgitta. Now we do not know who the owner is." 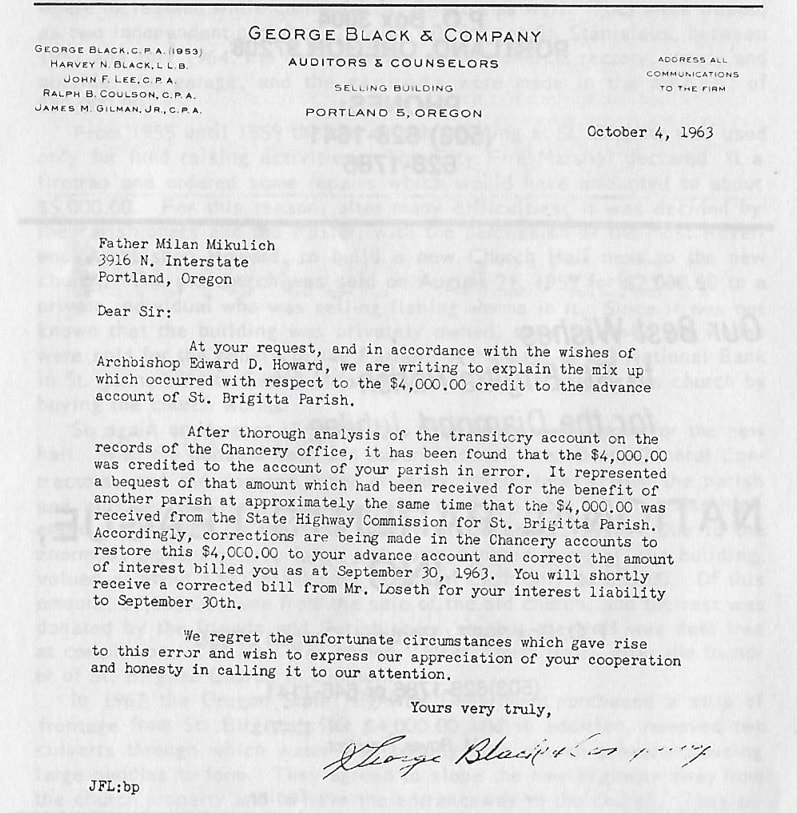 LANDSCAPING AND SHRUBS ON THE SLOPE
OF THE STATE HIGHWAY PROPERTY
IN FRONT OF THE CHURCH
When the state highway sale agents approached Father Milan Mikulich, O.F.M., pastor of St. Birgitta, at the beginning of 1960 to sell them a portion of the church property in order to widen the highway, they offered a rather small price and tried to avoid any other obligation, i.e., to slope and landscape the highway property which abuts the church property from the east end to the west end.

Seeing that there was no guarantee from these sale agents, Father Milan Mikulich hired Mr. Irwin Rand, an attorney, to deal directly with the attorneys of the State Highway Commission.

After a two-year period of bargaining on the one hand with the sale agents and on the other hand with the lawyers, an agreement finally was reached between the parish and the state highway. The agreement was signed on December 10, 1962.

The state highway obliged itself to pay the parish the sum of $4,000.00 in addition to six other items (as stated above), one of which is the obligation on the part of the state highway, on its own expense, to eradicate all blackberry growth on the whole slope abutting the church property and then mulch it and landscape it.

This part was not known to the sale agents of the same Highway Department. When Father Milan Mikulich sent a letter to the sale agents asking them to finish the landscaping on the slope as they had promised, one of them, after leaving the State Highway Commission, told Father Milan Mikulich that they were laughing at Father Milan's letter, saying that it was wishful thinking. We are not going to do anything. But when they received the contract signed by the chief of the State Highway Commission and St. Birgitta's attorney, they stopped laughing and said: Fr. Milan really got us! 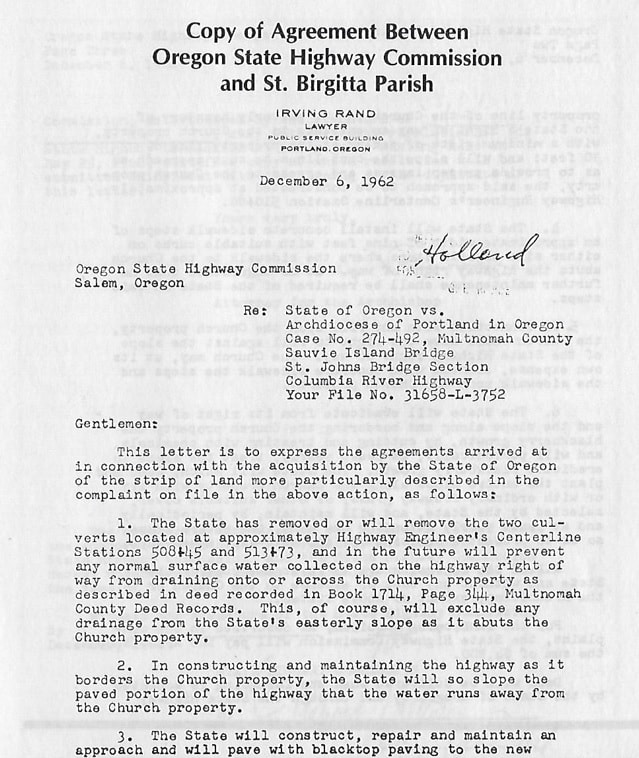 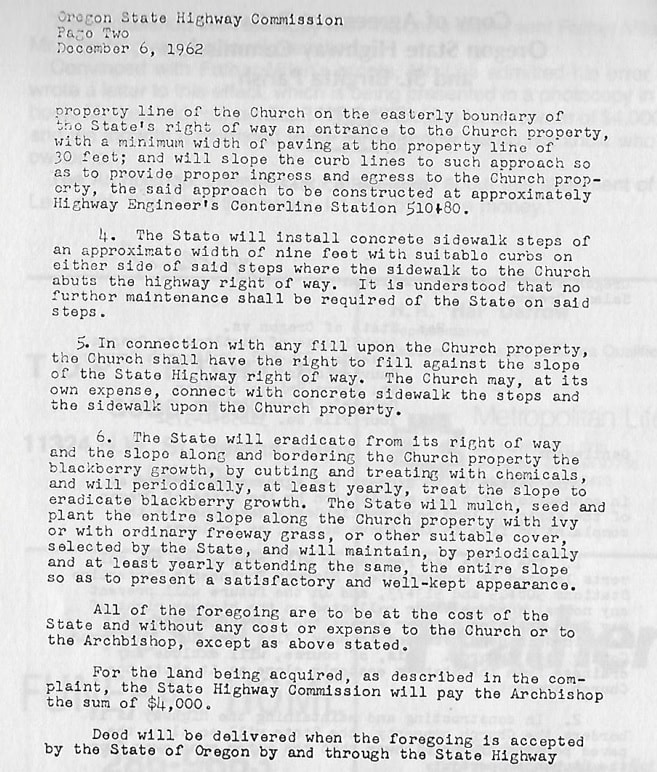 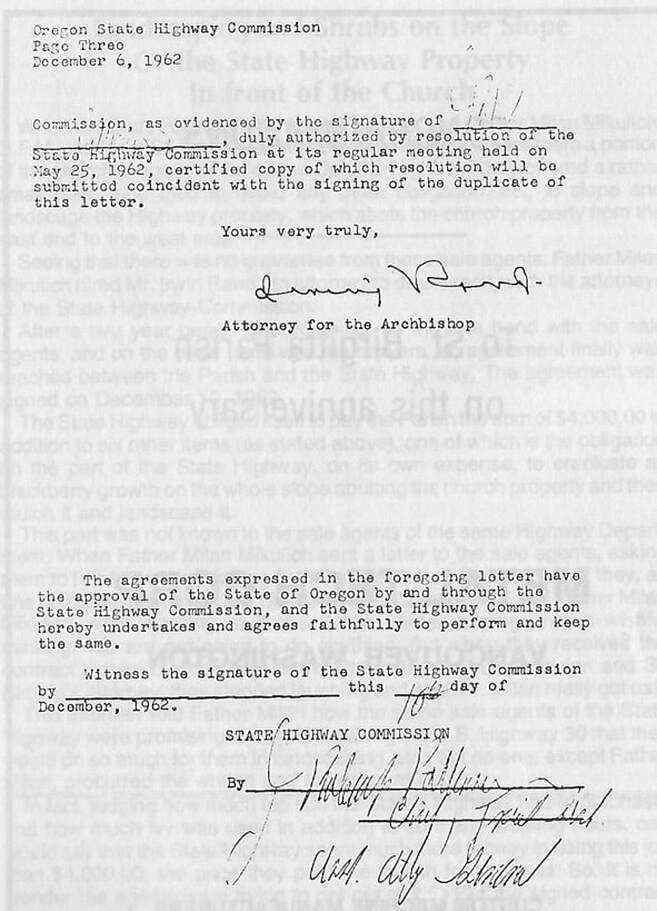 This informer told Father Milan how the same sale agents of the state highway were promising to all people along the U.S. Highway 30 that they would do so much for them in landscaping, etc., but no one, except Father Milan, procured the written and signed contract.

In fact, judging by how much top soil the state highway had to purchase and how much ivy was used, in addition to so many working hours, one would say that the state highway spent much more money in doing this job than $4,000.00, the price they paid the parish for the land. So it is no wonder the agents were trying to get out of it; but the signed contract forced them to do it.

After the work on the U.S. Highway 30 was completed in early Spring of 1965, the state highway workers began the work of landscaping on the said slope.

On March 15, 1965, Father Milan Mikulich wrote to the State Highway Commission asking them to allow the parish to make its own landscaping, even on the state highway property directly in front of the church. The letter reads: "Now, while your workers are doing this job (landscaping the slope with ivy), I would like to suggest, if it is agreeable to the state highway, that your workers, while planting the rest of the slope, do not plant anything on the section of about 100 feet of length which lies directly opposite to the church on both sides of the present concrete steps, i.e., about 60 or 70 feet between the steps and the paved entrance in direction of Portland, and about 30 or 40 feet on the other side of the steps in direction of Scappoose, so that I could landscape it together with the rest of church property adjacent to it, in direction of the church building."

The reason of the letter was stated: ''This written petition and your written permission would be necessary for any future protection of both parties."

On March 29, 1965, the State Highway Commission answered positively in a letter, which reads: "Plant shrubbery on either side of the concrete steps leading down the slope from the highway to the church for a distance approximately seventy (70) feet south and thirty (30) feet north of the steps. All on the right-of-way on the east side of the highway. Sta. 509+92 to Sta. 510+70, M.P. 8.97. Only low growing shrubs will be planted to not create a sight distance hazard, such as roses, azaleas, and rhododendron."
ERECTION OF THE CROATIAN MISSION CENTER
ON THE PREMISES OF ST. BIRGITTA PARISH
In 1960 the Sacred Congregation, at the request of the Most Reverend Archbishop Howard, appointed Father Milan Mikulich as Missionary for Croatian emigrants in the Archdiocese of Portland according to the Apostolic Constitution on "Exsul Familia" of 1952.

In 1962 Fr. Joseph Mikulich, O.F.M., was appointed missionary to the Croatian people of the Archdiocese of Portland in Oregon according to "Exsul Familia". At the same time Archbishop Howard appointed Fr. Joseph assistant to Fr. Milan at St. Birgitta and St. Stanislaus. He served as assistant at both parishes until July 1964 when he was placed in charge of St. Stanislaus after Fr. Milan's resignation.

In 1963, at the request of the same Archbishop Howard, the Holy Father, Pope John XXIII, granted permission to establish a mission for Croatian people of the Archdiocese of Portland in the district of St. Birgitta Parish. At the same time, Father Milan Mikulich, OFM., was appointed missionary director by the same Sacred Consistorial Congregation. Entrusted by Archbishop Howard to erect this mission for Croatian people, Father Milan moved again from St. Stanislaus to St. Birgitta in July of 1964. 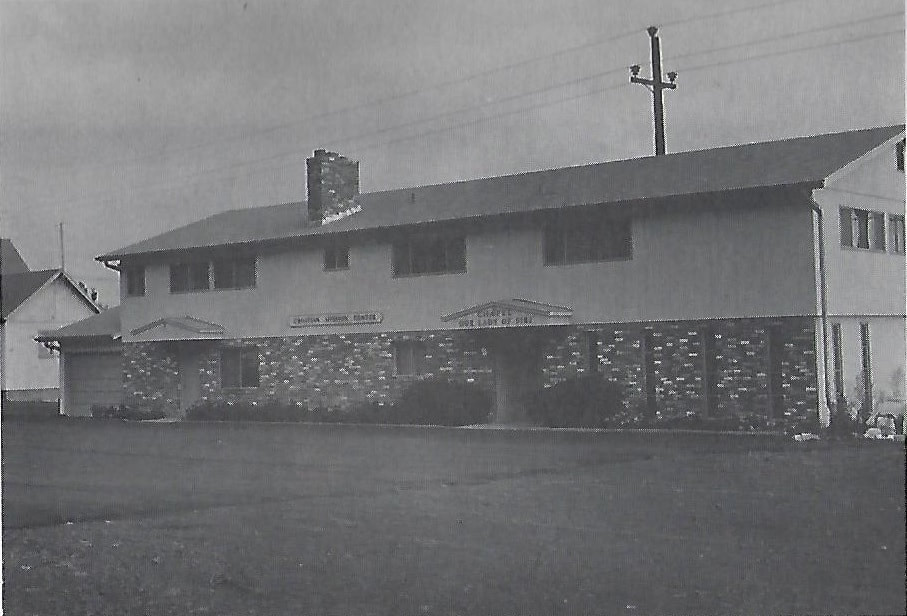 Croatian Mission Center & Chapel of Our Lady of Sinj, Built 1965

A few days before the dedication of the center and chapel, the parking lot of approximately an acre in size was asphalted. Landscaping provided, designed and constructed by Stanley, David and Sam Krause, was already decorating the church site. At the same time, a picnic ground with some old trees and some new trees was prepared.
Continue to Part 4
© Copyright 2022 St. Birgitta Catholic Church. All rights reserved.
ST. BIRGITTA CATHOLIC CHURCH